The Best Diets For Hypothyroidism

If you have been diagnosed with hypothyroidism you know all too well how challenging, if not impossible, weight loss can be. The medical profession commonly advises most people who need or want to lose weight and regain their health to; exercise more, eliminate sugar, eat whole grains, low fat and eat plenty of vegetables and fruit.

While mainstream media outlets promote everything from vegan to keto for hypothyroidism it can quickly become overwhelming.

Things have advanced dramatically in the last decade and even in the last few years when it comes to the “right” diet and what’s best for each person. Unfortunately, there is no one perfect diet to help treat a person with hypothyroidism but there are a few top diets that I see work best! Today I am going to share with you 3 of the most powerful diets I use with clients who have hypothyroidism, why they work and how they can help you lose weight as well improve your thyroid function.

Which diet will be right for you?

The WRONG foods to eat

First let’s talk about the wrong foods to eat if you suffer with hypothyroidism. These foods you want to avoid at all cost!

Since the majority of thyroid problems are somewhere on the autoimmune spectrum, we have to look at what triggers the immune system to attack the thyroid. When gluten, the protein found in wheat and other grains, passes through the gut lining and into your blood stream, your immune system will tag the foreign invader (gluten) with antibodies for destruction. The problem is that your immune system can mistake the thyroid for gluten, causing it to come under attack. You heard me right gluten looks like thyroid! The molecular structure of gliadin, the protein portion of gluten, closely resembles that of the thyroid gland. When gliadin breaches the protective barrier of the gut, and enters the bloodstream, the immune system tags it for destruction. Try and wrap your head around that one! Not only that, but gluten destroys the gut lining creating inflammation in the body which will impact your thyroid function.

Unfortunately if you are just starting out with a healthy way of eating for hypothyroidism you will need to avoid all legumes and grains including gluten free. This is because certain chemicals within these foods make them inflammatory in our bodies thus harming our thyroid and creating weight loss resistance.

Lectins
Lectins are plant proteins that bind to carbohydrates. Lectins can interact with and damage the delicate lining of the small intestine and lead to a “leaky gut” via inflammation of the microvilli (the finger like projections of the intestinal cell that increase surface area for better nutrient absorption).

Phytates and Phytic Acid
Phytates and phytic acid occur naturally within the seeds of grains as a phosphorus store. Phytic acid inhibits digestion and binds to certain minerals (specifically zinc, iron, and calcium) which are vital for our immune system to function properly, preventing their absorption.

Other foods you obviously want to avoid are

The Best Diets For Hypothyroidism

Hands down the Paleo diet is my absolute favorite for hypothyroidism. The Paleo diet is really a way of eating that is based mainly on foods presumed to be available to Paleolithic humans such as; meat, seafood, fish, vegetables, root vegetables, nuts, seeds and fruit. The paleo diet is full of foods that force your body into burning fat for fuel instead of sugar. It is geared towards getting you away from the modern day Standard American Diet (SAD) that is so heavy in processed carbohydrates, sugars and unhealthy fats.

By eating a paleo diet, you can begin to repair some of the metabolic damage from SAD eating, normalize your insulin levels, and reprogram your genes to burn stored fat for energy. When it comes to your thyroid it naturally avoids all of the above “avoid” foods. It helps to reduce inflammation, heal the gut and burn off unnecessary fat stores!

Eating a paleo diet creates a natural caloric deficit without feeling hungry or should I say HANGRY like most main stream diets do. This is because paleo based foods are hard to over eat and are very satiating. No need to calorie count or go hungry! Plus it includes high-quality carbohydrates such as sweet potatoes, butternut squash and bananas to play an important part of a balanced paleo diet. Very low carbohydrate diets can hinder the conversion from T3 to T4 and should be used carefully (see ketogenic diet below).

Although the Paleo diet has helped countless people with Hashimoto’s recover completely, I have found that the AIP diet can be necessary for some. I recommend those with an autoimmune condition to follow the AIP for 30-90 days and reintroduce the avoid AIP foods one at a time every four days to determine if all of the AIP avoid foods (eggs, night shades, nuts and seeds) need to be removed or not. From there most people find they only react to a few of them and can go back to eating a paleo based diet with the elimination of their known inflammatory culprits. Some may find they need to continue eating an AIP based diet in order to feel their best and keep their inflammation down.

The Ketogenic way of eating causes your body to go into something called ketosis. Ketosis is a metabolic state that happens when you eat very low carb, moderate protein and high fat. Eating this way will force your body to use ketones instead of carbohydrates as its main source of fuel basically turning you into a fat burner instead of a sugar burner. Ketones are what the body produces when burning fat hence the name Ketogenic diet. Following a true ketogenic diet, you would eat fat to supply most of your calories, eat limited protein, and no starchy carbohydrates.

The keto diet can be very helpful for losing weight and reversing insulin resistance which often comes hand in hand with hypothyroidism. However going super low carb can be an extra stressor to your system. As well the endocrine system needs healthy carbs to convert T4 to T3 the active form of thyroid.

What does this mean for you?

If you have insulin resistance or would simply like to try a keto diet you should but be sure to incorporate something called carb ups. Carb ups can be done in the evening at dinner time or implemented as an entire day or two of carbs. You can play around with each method and see where you feel best. You need to do it in a controlled manner, in order to make sure that you get back to keto right after that, and that your carb up weekend does not turn into a carb up week or month.

Carb up dinners: are just what they sound like, you eat a carb heavy dinner at night time while staying keto during the day. You can eat sweet potato (my personal fav), regular potato, rice, fruit, quinoa, gluten free pasta, squash etc.

Carb Up days:  Have an entire day of eating lower fat higher carb meals. I suggest sticking with a Paleo based diet when you are doing a carb up day. 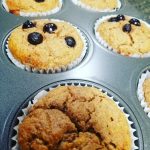 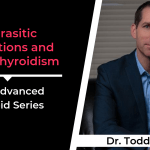 Next
Parasitic Infections and Hypothyroidism with Dr. Todd watts