The Dark Side of The Birth Control Pills & Uterine Devices 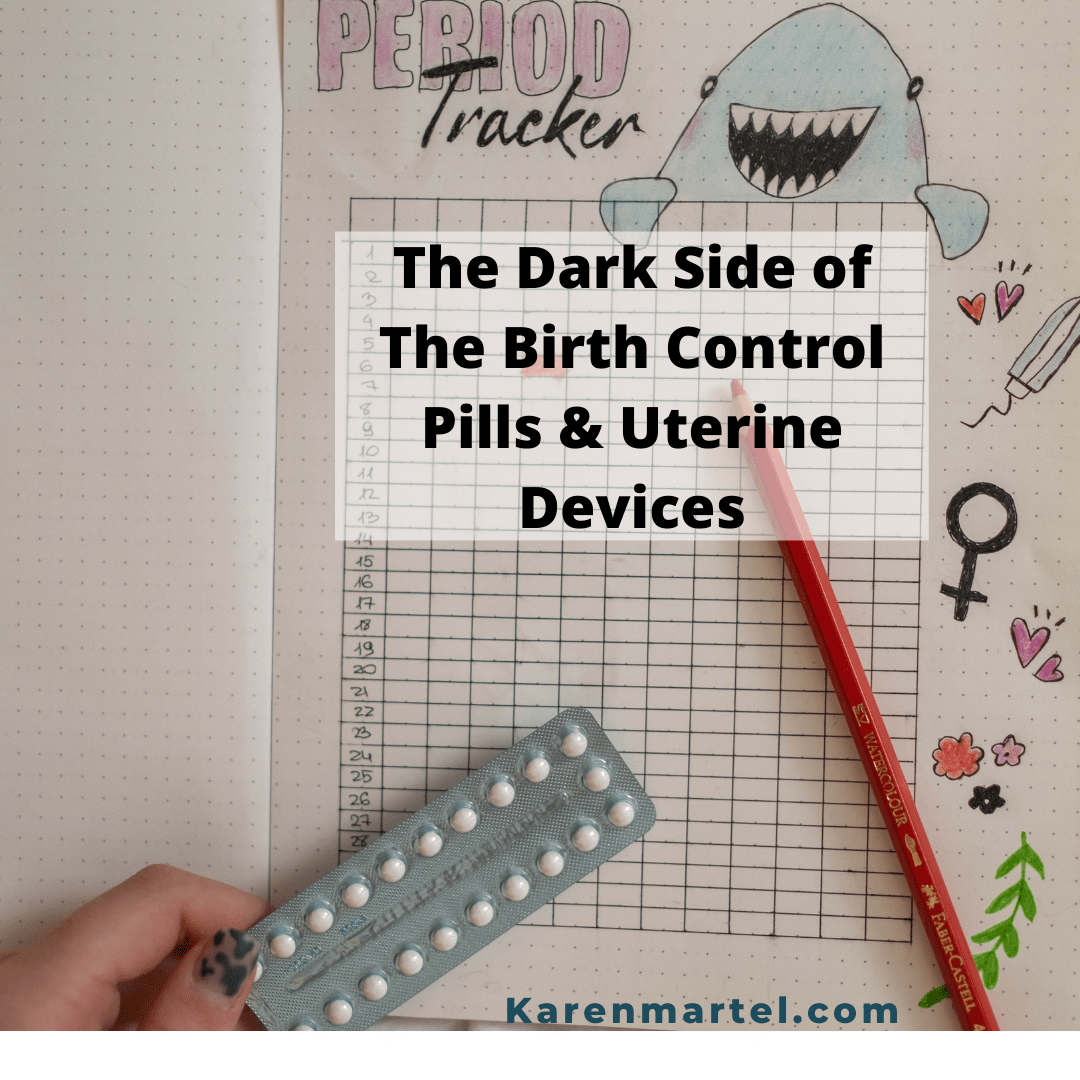 The first birth control pill was approved in 1960 and it has provided nearly 60 years of reproductive freedom for tens of millions of women. The glamorous commercials feature confident, independent women making self-determined choices.  The pill has been the option of choice for decades to prevent pregnancy and regulate their periods. In addition to pregnancy prevention, it is a common treatment option for PMS or PMDD (premenstrual dysphoric disorder). It may also help in clearing acne, treating severe cramping and heavy bleeding, decreasing symptoms of endometriosis, preventing ovarian cysts, treating symptoms of PCOS, and decreasing risk of ovarian and endometrial cancer. Sounds great, right?

But, is there a dark side to birth control pills and uterine devices? Believe it or not, after more than a half century of use, there is still conflicting information and still things we don’t understand about it.  Although birth control pills may be referred to as hormonal contraception, in reality, there are not any natural hormones found in birth control pills. Birth control “hormones” are not hormones.

Instead, they are endocrine system disrupters. The toxicology site at the US National Institutes of Health lists the synthetic ingredients found in birth control pills there. Synthetic hormones do a few of the same things that the hormones produced by our bodies do, but not everything. So, the results will be different.

For many, the pregnancy prevention aspect of the birth control pill is considerably more important than any negative impact that may come from disrupting natural hormonal rhythms that can be very subtle or take many years to manifest. Some of the more common side effects include headaches and dizziness, nausea, decreased libido, and breast tenderness. Many of these are temporary and will go away as you continue to take the pill. Hormonal contraceptives can also sometimes cause more serious side effects like blood clots, heart attack, and stroke, although rare, and are not generally recommended for anyone who has a heart condition.  Mood swings are most commonly reported among pill takers.  Some studies suggest that people who have a family history of depression are already at risk for mood disorders and are no more likely to experience depression that women who are not on the pill.  According to Kelley T. Saunders, MD, an ob-gyn with Banner University Medicine Women’s Institute, birth control pills actually help some patients with mood disorders such as PMS or PMDD (premenstrual dysphoric disorder) which is a condition that causes extreme irritability, depression, or anxiety in the weeks leading up to menstruation.  “The fluctuations of natural hormone levels may be contributing to these mood disorders,” she says. “And we’ve seen women with pre-existing PMS and PMDD do better on continuous-use hormonal contraceptives.”  For some it may seem that a steady level of “fake hormones” is better than up-and-down levels of real ones.

Ob-gyn Felice Gersh, MD, author of PCOS SOS: A Gynecologist’s Lifeline To Naturally Restore Your Rhythms, Hormones and Happiness, however, feels quite confident that birth control affects our brains and makes a person more susceptible to psychiatric illnesses like depression and anxiety.  Synthetic ingredients in birth control pills are hormone disruptors that replace the body’s real progesterone and estrogen with versions that do behave like natural hormones.  These “fake” versions may tinker with the brain.  Dr. Gersh says, “We do know that hormones are hugely important to brain health and brain function.”

Estrogen helps maintain the natural circadian rhythm, your internal body clock. Research has shown that when this rhythm is thrown off, it can affect the sleep-wake cycle, hormone release, eating habits, digestion and body temperature among other 24-hour cycles.

Dr. Gersh says, “To think [birth control] won’t affect the brain would actually be ludicrous.”  What about the widespread use of birth control pills among teenagers? According to Dr. Susan Cardwell, birth control pills contain the deadliest form of carcinogens, same category where you would find nicotine and asbestos.

One in every 8 women are diagnosed with breast cancer.  Since the pill was introduced, the incidence of breast cancer has significantly increased. Although there are many factors that have likely contributed to this increase, we have to also consider birth control as to be a major contributor because of its effect on breast tissue.  Because breast tissue becomes fully mature during pregnancy and breastfeeding, it is much less vulnerable to carcinogens compared to the immature breast tissue of adolescent girls.  Think about a tree.  When it is young, the branches and leaves are still tender and are easily damaged by storm winds.  However, a mature tree is more able to withstand the same storm because it is branches and leaves are stronger.

Some studies say that taking birth control pills can reduce libido by keeping estrogen suppressed and making testosterone inactive.  Not only wanting to have sex, but also the feelings of sexiness that are really important for women in terms of our libido.  In the book, “This Is Your Brain On Birth Control”, by Dr. Sarah E. Hill, Ph.D., evolutionary psychologist at Texas Christian University, Fort Worth, she states that the artificial sex hormones in the pill are designed to change brain function in a way that prevents ovulation, and says, “But it had never occurred to me that they influence all these other processes too.”

This led her to research the impact of birth control pills on women’s cognition and behavior. According to her research, the pill can affect what kind of partner you choose and could make you feel differently about that partner after you come off of the pill. The book cites that women who are on the pill were choosing partners with more feminine faces and were more satisfied with things like intelligence and being able to provide for them financially. They have a lower divorce rate because of choosing a mate for long-term attributes. Here is what Dr. Hill says happens after they stop taking the pill. “All of a sudden, they’re not attracted to their partner and when they did get divorced, it was overwhelmingly the female who initiated it.” Yet, she says she doesn’t want anyone to start overthinking their perfectly happy relationships because of what their contraceptive status was at the time they chose their partner, but just one of those things for women to keep in mind.

In preliminary research, women on the pill performed more poorly than natural cycling woman on a difficult exam and were more likely to give up on unsolvable word puzzles.  This lines up with other research showing that woman on the pill have structural differences in the hippocampus, the region of the brain connected with emotions and memory, that can impair the ability to regulate learning and memory.

Taking contraceptives come with risk as does any other therapy. Whether to take the pill or not, is a personal decision.  Some women do very well on the pill with very minimal side effects.  In fact, some women even feel better. However, the risks cannot be ignored. It’s important to consult your doctor and be transparent about any family history of depression, blood clots, cancer or sleep disorder.

To be a “pill popper” or not to be?  That is the question. To answer, each woman needs to have as much information as possible and understand the pros, cons and what trade off’s they are making.

Next
How Cannabis CBD Are Healing Everything From Chronic Pain to Anxiety with Dr. Bonni Goldstein