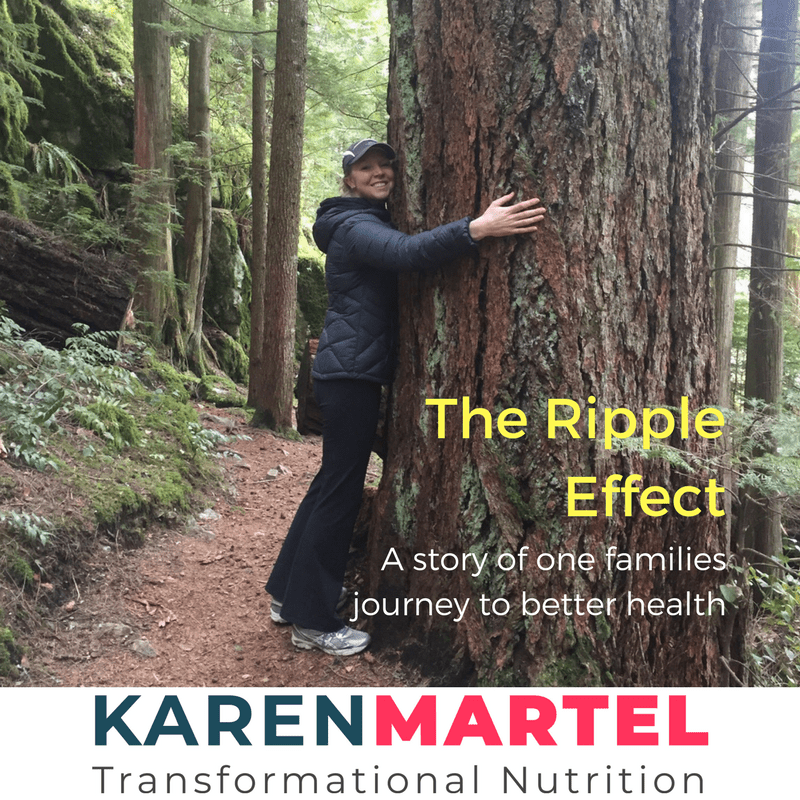 It was just after Christmas 2017 and I was feeling horrible.  I was 37 years old and 3 months post-op after having a hysterectomy for stage IV endometriosis.  I had always lived what I thought was a healthy lifestyle; I was active, didn’t drink, didn’t smoke and ate what I thought was a healthy diet.  I couldn’t figure out why I was having struggles with my health which included anemia (for over 10 years), hair loss, mild acne, digestive issues, fatigue, anxiety and depression.  I’m not one to make New Year’s resolutions but I decided that 2018 would be the year that I really focused on my overall health as clearly, what I had been doing wasn’t working for my body/mind.  Karen’s program had been recommended by a friend back when I was scheduled for my hysterectomy and I had signed up for her email updates.  I received an email about her 30-day reboot program starting in January and decided to sign up as I wanted to figure out what foods I was sensitive to.  I received the information and started to plan my grocery shopping for the week.  My husband looked over the plan and I was shocked when he said that he would like to do the program with me!

The first few days of the plan was challenging just until we figured what we could eat but then we both started to notice positive changes.  We both had more energy, less digestive issues, better sleep and lost a few pounds to boot.  These changes made it easy to stick to the program and after 3.5 weeks (when I thought I would be fantasizing about all of the foods I would eat when the program was over) my husband told me that he was so pleased with the results of the plan that he would like to continue this was of eating indefinitely.  I felt exactly the same way.  Although we had not joined the program with the goal of losing weight, by the end of the 30 days my 40 yr old 6’ tall husband had gone from 186lbs to 175lbs and I (at 37 yrs old and 5’10”) had gone from 157lbs to 148lbs!  If the story ended here, the outcome would be outstanding but what we found most surprising was how the changes that we made rippled out into our friends and family.

Our 8 and 9 yr old kids, who we thought were picky eaters, loved the new way of eating and started to get more involved with dinner preparation.  They also began to take smoothies and salads in their school lunches as well as making healthier choices when ordering at restaurants.  My husband was taking “different” lunches to work which intrigued his co-workers to ask about the changes he was making.  Others started changing their way of eating and now several of his co-workers have lost up to 20lbs since January.  My parents (who are both obese and have been “on a diet” for my entire lifetime) came to visit us and committed to our eating plan for the week of their stay.  Inspired by their results, they have adopted some of the changes into their lifestyle and after two months, my 66 yr old 6’ father has lost 18lbs and my 72 yr old 5’6 mother has lost 10 lbs (the lowest weight she has been in 10 years).

I’ve joined Karen’s On Track program and am loving the monthly challenges.  I love the approach to overall health which includes mental/physical changes to optimize the dietary changes.   The focus on overall health really appeals to me as a lifestyle as opposed to some fad diet.  Karen’s videos and interviews are interesting and provide new information as well as motivation to change one’s way of thinking about overall health.

Thank you so much Karen, on behalf of all of us!  May your wonderful work continue to ripple out into the world and make changes for the better.

Previous
Interview with Pam McCall. Meditation and Mindfulness To Lose Weight and Live Happier
Next
Interview with Maddy Moon: The Importance of Balancing the Feminine and Masculine Energy